Saltwater Fishing Plugs - Probably the Most Collectable of all Lures

Saltwater fishing plugs are hard-moulded lures designed to imitate small baitfish. Their bodies are made from plastic, resin, or wood - either balsa or a hardwood such as beech - and come with hooks attached.

Some saltwater plugs are designed to be trolled astern of a boat, others for casting - and some can be used for both trolling and casting.

And the difference between plugs and crankbaits?

'Not much' is probably the most reasonable answer.

Whilst it's not a strict definition, let's stick with 'plugs' for those lures that can be used for trolling and those designed for casting we'll call crankbaits.

So read on for plugs, or click here for crankbait lures.

Like many saltwater fishing lures, plugs are visually attractive items - well, to me anyway - so it's easy to be seduced into parting with your hard earned cash for a particularly jewel-like model when you should perhaps be a little more cautious.

It's rather important that they should appeal more to the fish than to the angler...

Unfortunately, many of those on the market are of doubtful quality, with weak hooks, joints and leader attachment points. 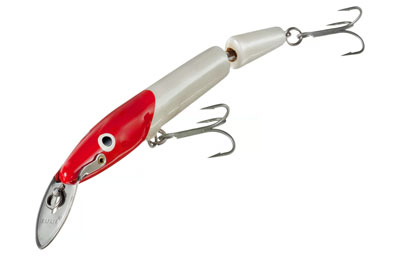 Good quality models have an internal continuous metal rod that connects the both pairs of hooks directly to the leader attachment point.

You need to be especially careful when buying jointed fishing plugs, which can be particularly unreliable.

But a properly engineered one like the Rapala Sliver Fishing Plug illustrated here (I confess to being a real fan of these) can be just as robust as a one-piece model.

How do Fishing Plugs Work?

With the exception of those that are designed to operate on the surface, most other saltwater fishing plugs sport a vane-like lower lip which causes them to dive below the surface when pulled through the water.

How to recognise deep-diving the difference between shallow-diving plugs

It's all about the diving vane. If it's relatively large and angled close to horizontal, then it will cause the lure to dive deep when pulled through the water.

Converesely, if the diving vane is small and more steeply angled, then the lure will operate close to the surface. 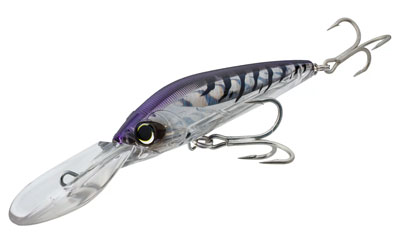 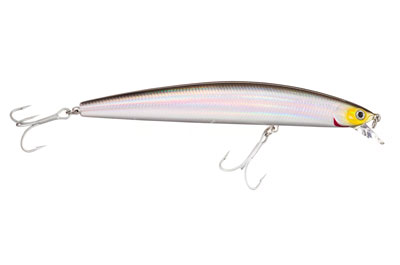 The Yo-Zuri 3D Magnum Deep Diver will dive to around 25ft (8m), whilst the Daiwa Floating Salt Pro Minnow operates at no more than 3ft (1m) below the surface.

Fishing plugs with metal vanes (as the lower one) need occasional adjustment as they can be knocked out of alignment, causing the lure to run erratically or capsize. 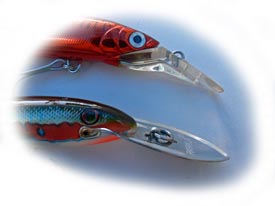 The plastic one is fixed, but the metal one is adjustable.

Check their action regularly, and if the lure veers off to one side or the other, gently bend the nose ring to the same side.

Continue to check and adjust until it runs straight and true, taking care not to over-adjust.

Fishing Plugs with plastic vanes (top left) won't need adjustment, the vane being more robustly attached to the body of the lure.

Saltwater fishing plugs are designed to operate at specific depth ranges within a given trolling speed range, and when you're looking to buy one for a particular application, this is what you need to know.

Often these characteristics - operating depth and/or optimum trolling speed - are printed on the packaging, so it's worth checking what it says on the box before you part with your cash.

Most fishing plugs can be loosely categorised as being either:~

But there are two other highly regarded saltwater fishing plug types that don't fit into this rather neat classification at all. Neither of them has a diving vane, but relies on either body shape (the Australian Runner) to get below the surface, or they just, well, sink (the Cedar Plug), both of which we'll take a look at later. First though, ...

The dedicated boat angler's thought processes here will be rather different from those of the cruising sailor.

The 'proper' angler will have a particular species in mind and will have chosen his fishing ground accordingly. Off the UK coastline, I'm guessing he'll have bass in mind, so he'll adjust his boat speed to around 2 knots and choose a plug that works properly at that speed.

He'll then take stab at what baitfish the bass are likely to be feeding on and select an appropriately designed plug.

Joey mackerel maybe? Then a Yozuri Crystal Minnow would be a good choice.

If our dedicated angler is fortunate enough to be in a sportfishing boat offshore in tropical waters, then he could well be after tuna and dorado.

Boat speed will be around 6 to 8 knots and his plug choice might well be a YoZuri Hydro Magnum, or a Rapala X-Rap Magnum, both of which will perform impressively around 30 feet (9m) down.

Wahoo? Then an Australian Runner fished deep on the downrigger will probably be his first choice of plug.

Our yachtsman though, intent on getting to his destination before...

...won't be anything like so picky. He'll have to choose a lure that performs well at the speed he's going at and be grateful for what he gets. A good plug choice for him (and sailboat skippers generally) will be the Rapala Sliver which is effective from 2 to 8 knots.

Sailing slowly along the UK coast with this plug he's well placed to pick up a bass or a pollack or two - but if the wind picks up and his boat speed increases then, in the absence of more athletic predators in these parts, he's more likely to arrive fishless. Sad, but true.

But if same yachtsman is sailing well offshore, particularly in tropical or sub-tropical seas, then he'll pick up good fish by trolling a suitable plug however quickly he's going. The Rapala Sliver remains a good choice, as would the lures chosen by our sportfishing boat angler.

Most saltwater fishing plugs are produced in a number of different finishes, each one intended to resemble a particular bait fish - sardine, mackerel, sprats, needlefish, ballyhoo, juvenile dorado or tuna for example. Just something else for you to ponder over!

However tempting, you should steer clear of snap swivels to attach the plug to its leader. Convenient I know, but these can seriously disrupt the flow of water over the vane and spoil the lure's action.

If the leader is of small enough diameter to use a knotted connection, the Rapala Knot is the one to go for. For heavier mono and plastic-covered multi-strand wire, make a crimped connection, and for single strand wire the Haywire Twist is your only option.

These buoyant 'poppers' or 'topwater plugs' wriggle and splash around on the surface, and are most effective when trolled slowly in gentle seas. If yours leaps out of the water and tumbles around, you're trolling too quickly - so either slow down or change to a shallow diving plug. 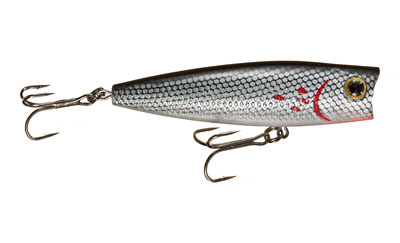 Characteristically they have blunt faces and no vanes. They're just the thing when the wind has fallen away and the sea has little more than a gentle ripple on its surface.

Hits can be spectacular, with striking fish carrying the lure high into the air. At other times your trolling lure will vanish in a gentle swirl.

The one illustrated above is a Williamson 'Jet Popper' which skitters along on the surface within a speed range of 2 to 4 knots. 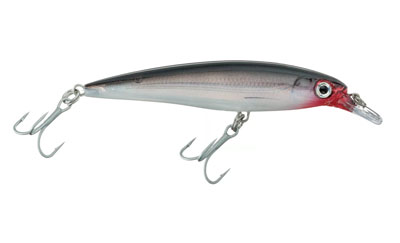 These trolling lures operate from just below the surface to around 10 feet (3m) down. Some models are prone to surfacing if trolled too quickly, where their hooks will foul the leader - not good.

The one illustrated here is an Rapala X-Rap, which will dive to between 4 to 6 feet (1 to 2m) when trolled between 2 to 6 knots.

These are designed for use primarily as casting lures, but like many plugs operate most satisfactorily as trolling lures too.

These can get to around 10m or so without the assistance of weights, planers or wire lines. 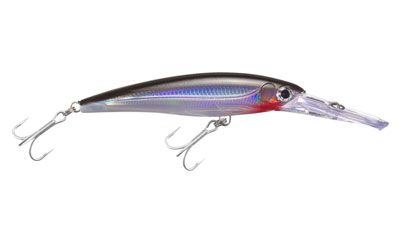 The one illustrated here is a plastic-vaned Rapala X-Rap 30 Magnum divebait which will run at depths of 20 to 30ft (7m to 10m) within a speed range of 6 to 12 knots.

These designs of diving plugs have no vane, but achieve their diving ability through their body design. 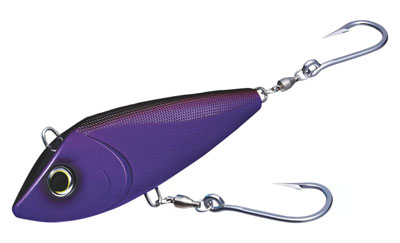 These types are characterised by a flat upper surface to their head, a deep body which gives them stability, a towing eye aft of the head and are weighted to achieve a 'nose-down' attitude.

Their unique design forces water directly towards the upper forward part of the lure, pushing it downwards and causing it to wriggle energetically.

When fished at depth on a downrigger and trolled at the upper end of their speed range, Australian Runners like the 6" Braid Marauder shown here have accounted for many a large wahoo.

Another approach is taken by the pretty much indestructible cedar plug, which relies on a weighted head to keep it below the surface. As you may have guessed, the body of the plug is fashioned from cedar, constructed around a lead sinker.

Original versions of Cedar Plugs were left in the natural colour of the wood like the one shown here, but these days many are painted.

In the manner of a skirted trolling lure and unlike other saltwater fishing plugs, the hook of the cedar plug is attached to the line, not the plug. This allows the body of the lure to slide away from the mouth of a hooked fish, destroying any plans he may have of chomping on it. 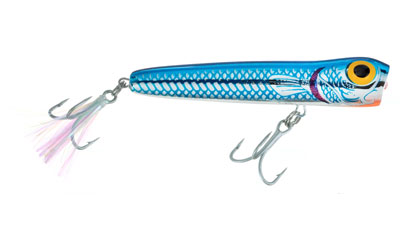 Some hollow plugs contain beads. As well as adding weight, these rattle around inside and transmit vibrations which are picked up by the pressure sensitive cells in the fish's lateral line, enticing it to investigate.

The resulting vibrations of these trolling lures invite the attention of interested parties over considerable distances.

Others have holographic bodies and 3D eyes. Fish detect their food through vibration, scent and vision, so anything you can do to stimulate their sensory receptors is worth a try.