All Fishermen Should Know
How to Read Tide Tables Properly

All sea anglers need to know how to read tide tables. Not just boat anglers, but shore fishermen too. Not only do tides influence the feeding times of fish, they can affect personal safety of sea anglers both afloat and ashore.

Boat skippers and kayak fishermen should never venture out to sea if they don't know what the tide is going to do.

Tides affect the depth of water under the boat and the strength and direction of the current affecting it.

Any kayaker caught in failing light, worsening weather and an adverse spring tide isn't going to forget about it in a hurry.

Clearly all of us that venture out to sea in small boats must plan for the tide and make due allowances - which is why we all need to know how to read tide tables properly.

What are Tide Tables? 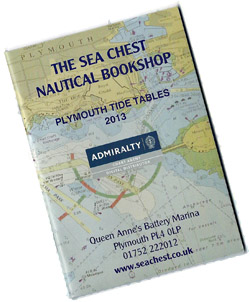 Tide Tables are published data - either in a printed booklet or electronic format - which predict the daily times of high and low water together with the corresponding heights of the tides at those times for specific locations around the coast. These locations are known as Standard Ports.

Other locations situated along the coast in between the Standard Ports, are known as Secondary Ports. 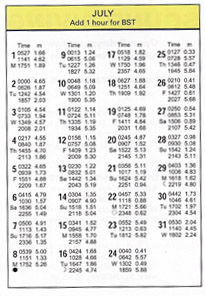 The time differences at secondary ports will be published in the tide tables (normally in a list near the front) as plus or minus so many minutes from that given for the high and low water times for the standard port.

Tide Tables give reasonably accurate predictions of high and low water times for the Standard Ports.

But they're not entirely accurate as strong onshore winds can 'hold up' a tide, and strong offshore winds can create a low tide sooner than predicted.

Tidal Range and Heights of Tide

The difference between high and low water on any particular day - the range - is obviously greater on spring tides, when the associated tidal streams are at their strongest. And of course, the opposite is true for neap tides.

This is vital information not just for small-boat anglers needing to know if there's going to be enough water over the slipway to launch and recover their boats, but for all fishermen, whether fishing afloat or from the shore.

Why? Well, just like people, fish have their active times and their rest times. Unlike people, most of whom are active during the day and rest at night, fish plan their life around tides.

As the tide rises and falls, water flows in and out of estuaries and along shorelines, creating strong currents which provoke feeding behaviour in fish. High and low water and the periods either side of them when the tide's neither rising nor falling are known as slack water, and it's during this time that most fish take forty winks. Not normally a great time for fishing, but everyone's usually up and going again about two hours after the ebb and the flood tide begins again.

So knowing how to read Tide Tables clearly helps you know where and when to fish - so you need to take a close look at a set for your home port if you're to get the best out of your day's fishing. Tide Tables are produced in several formats:~

But What Causes Tides?

Tides are the up-and-down movements of the oceans caused by the net gravitational effect of the moon and the sun on the earth.

In most parts of the world there are two high tides and two low tides every day, with approximately six hours between them.

However, anomalies do exist. Here in the UK for example, a second high water occurs during the tidal cycle between Poole and Southampton.

This is apparently caused by the funnel-like shape of the English Channel and the topographical features that exist locally - the effect is clearly apparent from the Tide Tables for this region.

Tidal streams are currents caused by the rise and fall of tide. Generally the currents flow one way during the flood tide and the opposite during the ebb tide. 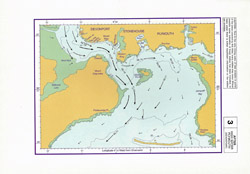 But a mile or two offshore, the time when the tidal current is about to change from one direction to the other - slack water - whilst related to the time of high/low water at the Standard Port, does not coincide.

And this is where Tidal Stream Atlases come in. These have 13 pages of chartlets - giving a picture of what's happening at the time of high water at the Standard Port, and at each hour either side of high water.

Armed with a Tidal Stream Atlas for your local area and a set of Tide Tables you'll always know what the tide is doing - and when it's doing it.