About 'Us' is something of an exaggeration in this case. It clearly implies the plural, maybe an organisation of some sort - certainly more than one. Which I'm afraid is all you've got. Just me, Dick McClary - although Mary might claim more than a little involvement... 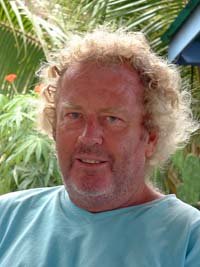 So what are my fishing credentials? Well, as you may have read earlier, saltwater fishing started for me a long time ago on Hunstanton pier, but since those distant days I've been lucky enough to wet a line in more exotic locations.

But my shore and boat fishing apprenticeship was served in the waters around the UK - winter cod fishing in the North Sea, bass fishing from the South Coast, shark fishing off the Isle of Wight, wreck fishing from the south Devon ports, and in the stunning Western Isles of Scotland.

A career in international construction took me to places like the Middle East, Indonesia, North and West Africa, South America - and of course I wasn't slow in finding out what the seas off these shores had to offer.

My first fishing boat was a 16ft Orkney Longliner which I had when living and working in Scotland. Back 'down south', I traded the Longliner for a much faster (and thirstier) cathedral hulled Pilot 590 with an 85hp Johnson outboard, enabling me to get well offshore in a very short time.

From Power to Sail

My enthusiasm for fishing afloat soon lead me to the inescapable fact that gasoline is expensive, but the wind is free. And so my other obsession - sailing - was born. First with an Etap 22 sailboat, then a Nicholson 32 'Jalingo 2' which took me south across the Bay of Biscay and into the Mediterranean.

It was on this boat that I discovered just how productive a trolling handline could be; my first ever tuna being hauled over the transom as we crossed the drop-off in the Bay of Biscay - and very tasty it was too! 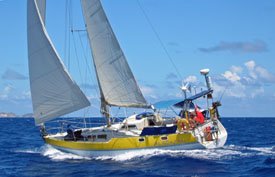 Having now had a taste of fishing and sailing in warm climates, and finding it much to our liking, I suggested to Mary that that perhaps 'some day' we should cash in our chips, build a bigger boat and do some real sailing.

As a result of that momentous decision, we built our current boat 'Alacazam'.

With our day-jobs but a memory we cast off from our Plymouth mooring and set sail for new fishing and sailing grounds over the horizon. First France, then Spain, Portugal and out into the Atlantic Ocean for the island of Madeira. 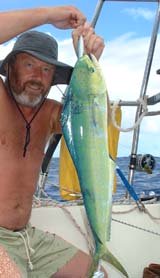 The further we sailed, the better the fishing became - Atlantic mackerel giving way to bonito and albacore. Then the spectacularly coloured dorado (or mahi-mahi as it's also known), the first of many on our ocean crossing.

From Madeira we sailed south to the Canary Islands, spending several weeks getting ready for the 3,000 mile crossing of the Atlantic Ocean. Then we were off. Initially with the intention of stopping off in the Cape Verdes, but as the trade winds set in we turned right and set course for Guadeloupe in the Caribbean.

Some 500 miles west of the Cape Verdes we were joined by an uninvited guest who stayed with us for nearly 2,000 miles before leaving as suddenly and mysteriously as he had arrived.

This brown booby or 'Bird', as he became known, enthralled us daily with his magnificent flying displays, gliding effortlessly through the wave troughs with his wingtips just clear of the sea. 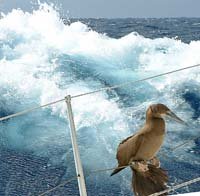 But this aerial elegance evaporated completely once the landing gear was down. We witnessed several cartwheels over the guard wires, tee-bones into the hullside and entanglements with the rigging when things moved into the wrong place after commitment to touch down had been made. Repeated attempts to balance on the guard wires with webbed feet were unsuccessful.

Long sorties over the horizon were frequent, but not once did we see him diving for fish as boobies and gannets normally do; that is hovering head down over a luckless fish, prior to plunging dart-like after it into the sea. Our Bird had developed a much more energy efficient technique. He would sit on the foredeck scanning our bow wave, waiting for a shoal of flying fish to erupt from the surface. Instantly, he would be on the tail of one of them, following its every dip and swerve. At the end of the chase they would hit the water together, usually to the distinct disadvantage of the flying fish.

Surprisingly, when flying fishes crash-landed on deck 'Bird' wasn't the slightest bit interested in them. I was though; lightly grilled, they are delicious!

When he finally left, with Guadeloupe on the horizon, we felt sad - but privileged.

Eighteen days after leaving Tenerife, during which period we dined lavishly on freshly caught dorado and tuna, we anchored in the French Island of Guadeloupe, feeling rather pleased with ourselves - but conscious of the alarming decline of our cruising fund.

Something had to be done.

A little ambitious this, I thought. But magazine articles about saltwater fishing and offshore sailing? That might be worth a go. And so it was - my articles have been published in the UK, the US and the West Indies. 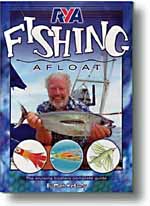 Let's face it, there's plenty to write about on those two topics - particularly sailboat fishing, as many sailors only tackle it in a half-hearted sort of way.

When Alacazam arrives in an anchorage with fish to spare, we're very happy to share them with other yachties along with a few sailboat fishing tips to help them catch their own. It's a great way of making new friends over a cool beer or two...

"You should write a book about saltwater fishing" said one grateful recipient of four freshly caught wahoo steaks.

"Told you so" said Mary. You're probably getting an idea by now as to who's the driving force behind all of this...

Around that time a good pal of mine, a published author himself with all the right connections, was strongly encouraging me along the same lines. And so the seed of 'Fishing Afloat' was sown.

Isn't it strange how things develop if you just give them a chance?

With the book published I thought I might try building a website to help sell a few more copies. Before long the website had developed beyond all expectation, generating rather more than just the royalties on 'Fishing Afloat'. You're reading it now, and I hope you're enjoying it.

But how could a internet numpty like me, who knew absolutely zero about building websites, end up with one like this?

Well, that's another story - a Solo Build It! story... 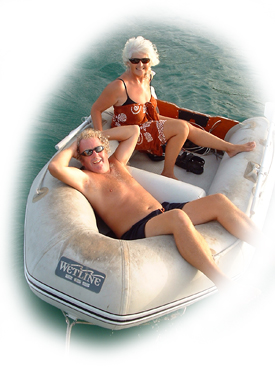