As an offshore sailor and a saltwater angler, sailboat fishing is my passion. For any sailor on a long offshore passage, the ability to pull a few protein packed, omega 3 rich fish from the sea is a rather useful skill. So here I'll ignore the fishing-for-sport element and concentrate instead on fishing-for-food.

The other good news is that the fishing gear required is inexpensive - just a simple trolling line and a few lures.

In fact, the market value of your first decent-sized fish is likely to exceed your investment in the fishing equipment used to catch it - not that you'll want to sell it, of course. You'll want to eat it and catch more, which presumably is why you're here.

So if it's that easy, why do some yachtsmen tell you that sailboat fishing is a waste of time?

Sailboat Fishing Tip #1 ~ Use a Snubber

First, let's think about what happens if you don't use a snubber on your offshore trolling handline. So, you're sailing along nicely when a tuna hits your lure. Instantly realising he's made a serious error of judgement, the tuna sets off lickety split in the other direction. Bang! Probably a broken line and no lure - definitely no tuna!

But with a snubber there's no bang, just a satisfying booiiing as it does its thing, taking all the shock load out of the tuna's instinctive reaction and alerting your crew to the tug of war to come. A vital part of any trolling handline, is the snubber.

It's made up from a length of bungee cord - essentially a large elastic band between the handline and the boat. Alternatively, if you've got one handy, an old bicycle tyre inner tube will do the job just fine.

The snubber, an essential part of a trolling handline

The safety line, made up from a length of 8mm nylon line (or similar) is attached to a cleat or some other strong-point on the boat. Make sure the loop in it is long enough for the snubber to fully extend, but not so long that the snubber can be stressed beyond its yield point.

Not you or your boat, just the business end of your handline.

Up until quite recently I used a 5m (16ft) long nylon monofilament leader at the end of my trolling line, and very happy with it I was too.

After all, it was cheap and seemed to work.

Then I discovered fluorocarbon fishing line, a sort of hi-tech monofilament line.

It's thinner, stronger than mono, and best of all it's invisible!

Underwater that is, a trick resulting from fluorocarbon line having almost the same refractive index as water.

I'm absolutely, 100 percent, hand-on-heart sure that it's brought more good fish to Alacazam's galley than would otherwise have been the case.

Just published, the eBook that contains everything you need to know about catching fish from a sailboat.

If you're serious about catching fish while underway, then you really should take a look at it.

Take a look at 'Secrets of Sailboat Fishing' Here! 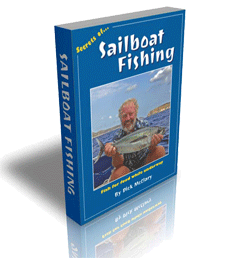 Most of the fish that you're likely to catch will be looking upwards, hoping to spot their prey silhouetted against the sunlit surface. So this is where your lure should be, close to the surface, and it's no bad thing if it leaps out now and again like a flying fish in escape mode.

A cheap and cheerful Bulb Head Squid should get results here, but a slightly more expensive skirted trolling lure may well get better results, particularly if it leaves astern a fish-attracting bubble train, as it pops and fizzes down the face of a following sea.

But what about when you're sailing on the wind and a following sea is but the stuff of dreams? Here a lure that leaps out of the sea will not be so effective, the wave train and the motion of the boat causing it to crash through wave crests, rather than slaloming down the front face of the waves. You need a lure that will get down deeper, below all the unpleasantness on the surface.

There are several ways of achieving this. One is to rig a trolling weight on your main line - not on the leader - to take the same lure down deeper.

Or you could forget about weights and planers altogether and use a deep diving plug.

Yup, they are more pricey but they really do what it says on the box - 6 knots with the right deep-diver (like the Rapala X-Rap Magnum shown here) will get you down 15 to 30 feet.

These deep-diving trolling plugs are characterised by the long, broad beak at the head of the lure. The greater its surface area, and the closer it's angled to the horizontal the deeper it will dive.

In the other extreme where the wind is light, the sea almost flat and the boat just ambling slowly along, a topwater lure - like the Williamson 'Jet Popper' - is well worth a try.

But only if you're off the wind and using a skirted lure of the type that swims along close to the surface. So what's a bird teaser? It's a decoy lure which you should attach at the end of your trolling line and ahead of your leader. The leader should be shorter now, around 3m (10ft) or so.

The bird is buoyant and skips smartly along astern, splashing noisily around ahead of the lure. The little winglets on either side of it shoot out an arc of spray either side increasing the area of disturbance on the surface.

To really maximise the effect of one of these, rig it ahead of a daisy chain like the Boone Bird/Daisy Chain Rig shown here.

Any predator within, er, earshot, will wonder what all the fuss is about, and is likely to amble over and take a look. What he'll see is an unsuspecting prey - your lure - in hot pursuit of a shoal of baitfish. The rest, as they say, will soon be history.

Are you serious about putting together a robust handline for offshore trolling?

Do you want to know exactly what to buy, where to buy it online and how much to pay for it?

If so, take a look at Assembling Your Offshore Trolling Handline.

An easy way to do this is to play the numbers game. Use two trolling lines, one from each quarter.

To reduce the risk of them tangling together (note my use of the word reduce, not avoid), make the windward one shorter than the leeward one. Your boat's leeway will help keep them apart - more so if you clip the leeward one to a higher point such as the backstay, or the stern gantry if you've got one.

If you've only got one bird, use it on the shorter of the two trolling lines. Multihull owners could easily find somewhere to add a couple more handlines to help feed the multitudinous crew.

It's often said in sailboat fishing circles, that to avoid making a crimson mess in your cockpit, you should leave your hooked fish attached and tow it astern until it drowns. The two obvious reasons for not doing this are:

And there's another reason. When the fish is fighting for its life, lactic acid accumulates in the fish's muscles - it's flesh - which will taint the taste. The longer and harder it has to fight, the greater the accumulation will be, and the greater the taste will be affected.

My advice? Get it aboard as soon as you can - using a gaff - and kill it quickly and humanely. Not by beating it to death with a heavy blunt instrument - that will end in tears, most probably yours. Just pour some strong alcohol down its gills. Not your finest malt of course - a splash of the rot-gut firewater you give only to your most persistent guests will be fine. This will cause brain death very quickly and it will leave this world in a spirit of great contentment.

If you don't keep your hooks needle sharp you will lose fish. Touch them up with a Hook File

before and after each use. 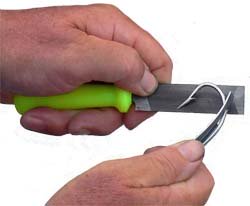 A fish hook sharpening file. Use it often!

Check the point before each use and touch it up with a Hook File as necessary.

The technique is to stroke the file towards the bend of the hook - not towards the point. Use the file on the two flats to ensure that the flats converge in a razor edge and a sharp point. After a few strokes, try the following thumbnail test...

Drag the point of the hook lightly over your thumbnail. If it tends to dig in, leaving a white scratch, it's sharp. If it doesn't, it isn't.

Do it correctly and it'll soon be 'up to scratch'!

Forget about even the best fishing knots in lines of the diameters we're talking about here - you'd never be able to pull them up tight. Crimped connections to hooks and swivels are your only option.

Use only top quality hooks and swivels by well-known manufacturers. Forged bronzed mild-steel hooks and ball-bearing swivels are what you need.