Big game fishing reels have to be designed and manufactured to high standards if they are to survive the strains put on then by the powerful pelagic fish of the open ocean, and to meet the demands of the skilled anglers that have invested in them.

Here in the UK it's probably only sharks that will test big game fishing reels to anything like their full capacity, but elsewhere in warmer oceans the super-fast and powerful gamefish - large billfish particularly - will test them to the limit.

Trolling is the usual way to go for these fish, and the reels best suited for this technique are of the traditional type, of which there are two basic variants - star drag reels and lever drag reels.

Let's take a look at these first...

Ask any fisherman to name an American-made big game reels and it's pretty much certain that Penn Reels will be at the top of his list.

These large, relatively inexpensive, conventional reels - typified by the Penn Senator Series of big game fishing reels, with take-apart frames and star drags - were the reels of choice for the big game anglers of the past - Zane Grey, Philip Wylie, Ernest Hemingway, Mike Lerner... 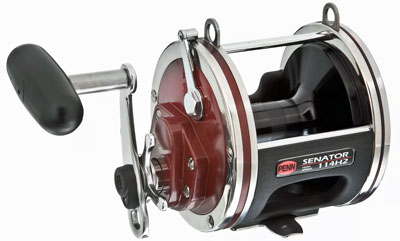 And of course, with modern materials they work even better now than they did then.

But there's no doubt that they are outclassed by the much more sophisticated - and expensive - lever drag reels.

Lever drag reels like the Penn International Series are the natural successors to the star drag models - but they do come at a considerable premium ... 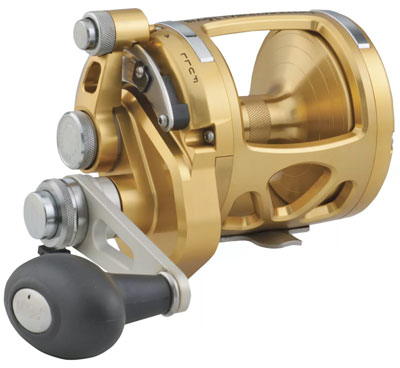 Note that we're talking mono line capacities here. If you choose to use the much narrower braided line then you're going to be able to get far more line on the reel - so much so that you may well be able to use a reel of the next size down.

Traditional reels are known as multiplier reels in Europe, because the spool turns more than once for each turn of the handle. Were that not the case, then the line retrieve rate would be fairly pathetic - particularly so when you've got a lot of line out and the effective diameter of line left on the spool is small.

Rather than just the gear ratio, what you really need to know is the amount of line recovered for one turn of the handle, but remember that when this is quoted by the manufacturer it's normally for when the spool is fully loaded. It will be much less when the fish has stripped a mile or two of line off the spool.

The other point about gear ratios is that, while a high gear is great for recovering a lightly loaded line in a hurry, it's not so good when you're trying to persuade a hard-fighting fish back towards the boat.

One Speed or Two?

Given the choice, it would always be two for me. The only downsides to a dual-speed reel are:~

But the benefits are undeniable. For example:~

Ah yes, that old star-drag versus lever-drag thing again. Whilst in recent years star drags have improved to the point that they're almost a match for lever drags in many fishing situations, for big game fishing the lever drag beats the star drag hands down.

Not only is the lever drag smoother and more controllable than a star-drag, it can be preset to operate between free-spool and a setting just below the point at which the line will break - the strike drag setting. The pre-set device is normally a knurled knob - turning it clockwise increases the drag setting and vice versa. Remember that as with all multiplier reels, the more line a fish takes, the more rapidly the diameter of the remaining line on the spool reduces.

As the effect of the drag is proportional to the diameter of the spooled line, you should adjust the drag setting accordingly throughout the battle with your fish.

You'll need a spring balance to do it properly. Here's how, and it's best done outside or with the boat in its slip:~

In theory at least, if you lose the fish it won't be because your line has parted.

This is the ratchet, or clicker - and it's the source of the most beautiful, adrenalin rushing sound that any true big game fisherman will ever want to hear. Operated by a button or lever, it will provide that wonderful wake-up call when a fish strikes your lure and heads off to the horizon with it.

But yes, with the recent advances in spinning reel design and engineering, it is now entirely possible to catch marlin and tuna up to 200lb or so on spinning outfits.

These reels are suited for both braid and mono line, and the best of them match traditional big game reels in both price and quality.

Looked after in this way, a big game fishing reel may well last you a lifetime.

Any fishing reel, but especially a big game fishing reel, will be the most complex mechanical item - and likely the most expensive one - in your tackle box. As such, it will pay in the long run to choose with care and buy the best you can afford.