Saltwater crankbait lures are shaped and decorated to look like small baitfish. Their bodies are usually hard-moulded plastic or resin, although some of the old-style wooden-bodied crankbaits (balsa or a hardwood such as beech) can still be found.

As their name might suggest, crankbait lures are intended primarily for use with a baitcasting outfit, although larger versions can also be used effectively as trolling lures.

They're attractive items, often appealing to anglers through their aesthetic appearance rather than their fish-catching design qualities.

Which puts us in something of a dilemma. Do we play it safe and stick with crankbait lures from a manufacturer we're familiar with, or experiment with new lures that we've not seen before? Hmmm, tough call...

The most robust crankbaits will be constructed with the hooks and leader connection points connected together as shown here, rather than having them screwed in individually.

Whilst a one-piece lure would appear to be the more robust, provided the connection between the two parts of a jointed lure is properly engineered, you'll not be let down.

The thinking behind a jointed lure is to provide an enhanced, tail-wriggling action that mimics the motion of a frantic baitfish.

Just click on the images for more info about these lures.

Whether they float or sink comes down to their buoyancy. Archimedes tells us that if they're heavier than the water they displace, they'll sink - and if they're lighter, they'll float.

In both cases the diving ability comes from the vane - or lip - that protrudes from the lure's, er, chin. On retrieve the water flows over the lip and pushes the lure deeper below the surface.

Which version you choose will be down to the depth of water you're fishing in. Casting from the shore into shallow water, a floating/diving version will allow you to get the lure to rise - maybe to avoid an obstruction - by slowing down the retrieve rate a little.

But if you want to get the lure down to depth before you start your retrieve, then the sinking version is the one to go for. And if you know how quickly the lure sinks, then by counting off the seconds from when it hits the water you can start the retrieve at the depth you believe the fish are at.

The lip will be made of aluminium, stainless steel or clear plastic. 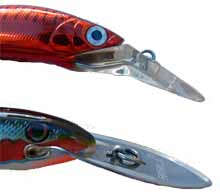 Crankbaits can have plastic or steel lips

Crankbaits with moulded plastic lips (like the one on the left) won't need adjustment, the lip being more robustly attached to the body of the lure.

Crankbaits with metal vanes (as the lower one) will need occasional adjustment as they can be knocked out of alignment, which will make the lure to run erratically or capsize.

If the lure veers off to one side or the other, gently bend the nose ring to the same side.

Continue to check and adjust until it runs straight and true, taking care not to over-adjust.

Generally, the faster you retrieve the lure the deeper it will dive. The actual depth the crankbait will achieve is limited by the angle of the line between the crankbait and the rod tip. Clearly as the lure gets closer to the rod, this angle will increase and the lure will be pulled up by the rod by a greater force than the lip is forcing it down.

But it's the size and angle of the lip that determines the maximum depth that a lure can achieve.

The greater its surface area the more force it will exert, and the closer the lip is to the horizontal the deeper it will dive.

Suspending crankbaits have neutral buoyancy, which means they weigh the same as the volume of water they displace.

The result of this is that they neither sink nor float, but dive to a predetermined depth and stay there - even if you stop the retrieve for a moment or two.

Many anglers will tell you that this is when most sub-surface predators will strike, with the crankbait suspended motionless just where they'd expect to find it.

These 'Surface Poppers' are lipless unweighted crankbait lures that always operate on the surface.

Their identifying feature is their blunt face which creates the fish-attracting popping, bubbling bow wave.

Yo-Zuri Lures have designed some clever internals which enables exceptionally long casts to be made.

Their patented MWTS system uses internal steel balls which take up position toward the back end of the lure which makes it cast tail-first like a bullet. 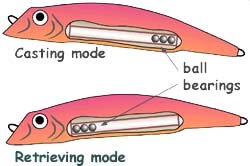 On splashdown in this position though, the lure would hand tail-down in the water and on retrieval be completely ignored by even the dumbest fish, were it not for Yo-Zuri's ingenious solution.

Which is? Incorporate a magnet at the front of the crankbait which pulls the balls forward, making the lure take up the usual nose-down, fish-catching position!