A following sea, blue sky, fluffy white clouds - and a selection of trolling lures readily to hand. What more could you want?

Some 15 nautical miles offshore, our sailboat Alacazam is bowling along nicely at around 6 knots in a the northeasterly Caribbean trade winds.

There're a few flyingfish around, gliding over the sea in a desperate attempt to avoid their date with the food chain.

Always a good sign, this - there're some hungry predators around for sure.

Time to get the trolling lures out...

But Which Type of Trolling Lure? 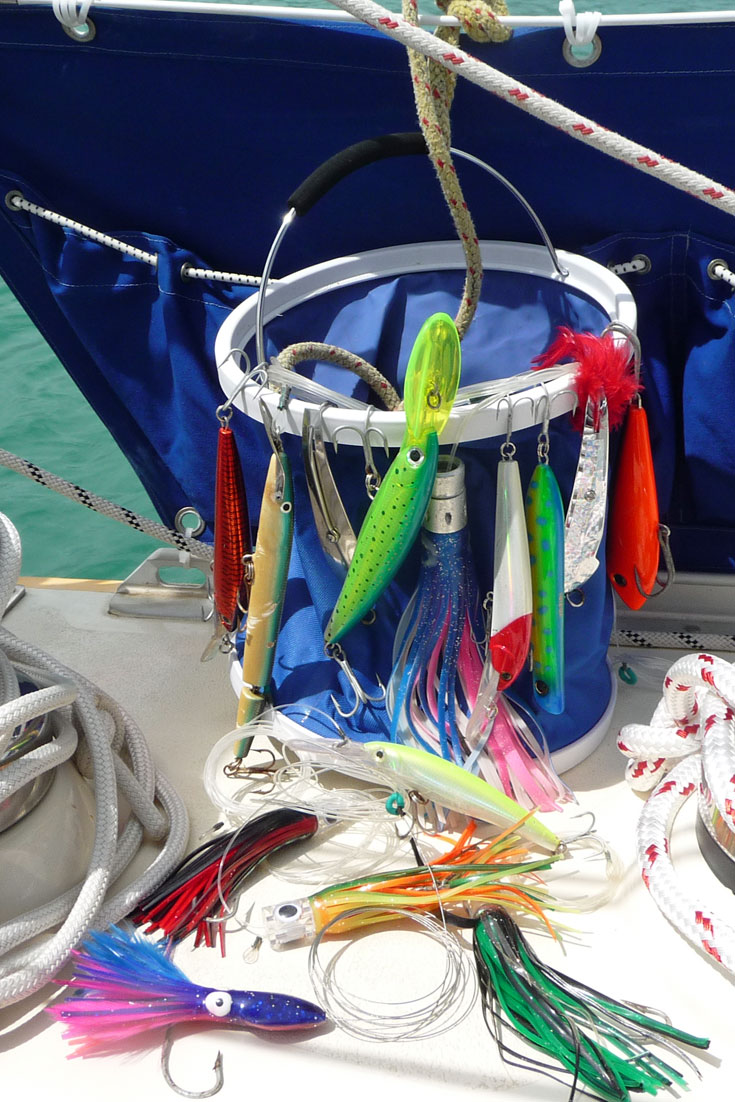 A good selection of trolling lures, but which one will get the desired result?

The flying-fish activity indicates that the fish are clearly feeding close to the surface, so there's no need for a deep-diving crankbait or a heavy trolling spoon on a weighted line.

We could use a soft-plastic swimbait, a cedar plug maybe, a shallow-diving plug or even a top-water plug - but my money says an octopus skirted trolling lure that breaks the surface every few seconds will get a result.

So a Skirted Trolling Lure It Is - but Which One?

A few years ago, on a day like this, the accepted lure-fisher's dictum 'Dark Day/Dark Lure, Bright Day/Bright Lure' would have had me grabbing at the brightest octopus skirted lure I could find.

These days, I'm not so sure. My attempts to prove the theory one way or another by trolling two identical but different coloured skirted lures astern have been inconclusive. The experiment continues, but the jury's still out on that one.

Like many salt water fishing lures, skirted lures are highly collectable, so I've got plenty to choose from - let's go for a fairly bright one with a bit of dark in it - blue, yellow and pink.

We're not looking for giant fish here, so we don't need an enormous lure.

One about 8" (200mm) long should be about right for whatever's worrying those flyingfish.

Unless you really do want to get hooked up with something truly mighty, this is probably as large a lure as you'll need.

Of course, using a moderately sized lure like this one doesn't rule out the possibility of a large marlin having a go, but it does make it less likely.

We'll run this one fairly close to the transom, about one and a half boat lengths off, and rig it behind a 'Bird' teaser.

And the Shape of the Lure Head?

So it's a bright coloured skirted lure then, but with what about the shape of the lure head? Bullethead, flathead, slanthead ...?

We'll go for a 'chugger', which is a flathead derivative with a concave dish scooped out of its face. These swim with a distinct head-shaking action and work over a wide range of sea conditions.

Hook Size and Location in the Lure

Incidentally, it's worth making sure that not only is the hook absolutely razor sharp, but also that it's the right size and in the right place.

The gape of the hook should be about the same as the width of the lurehead - one hook size either way will be fine.

If it's much smaller, the skirt will mask the hook point and reduce hook-ups. Much larger and it will unbalance the lure and spoil its action.

But a little further back would be better.

The hook should be positioned well aft, but not so far back that it's visible at the end of the skirt.

In the illustration on the right it could probably go a little further back. The position is adjusted by threading beads on the line, extending the distance between the hook eye and the inside of the lurehead. 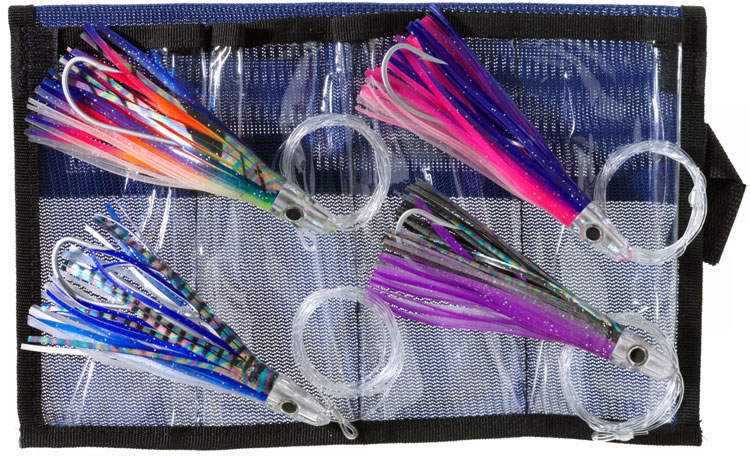 Components of a Skirted Lure

The beads are there to position the hook.

There are just three main parts of a skirted lure - the hook, the skirt and the head.

As the hook isn't built-in to the rest of the lure, it can be rigged as heavy as necessary for the largest of fish, making them a firm favourite of big game anglers worldwide as well as those anglers of more modest ambitions.

As mentioned above the row of green beads is there to adjust the position of the hook such that a chasing fish won't see it - but won't miss it either!

The skirts on a successful lure will soon get beaten up. Fortunately, they're reasonably cheap and easily replaced.

It's the design of the head that dictates the behaviour of the lure in the water, and creates most of the disturbance - or 'noise' - as it's drawn through the water.

The the lure-head creates the bubbles forming the all-important 'smoke trail'.

The result of this disturbance is a stream of bubbles trailing behind the lure, and it's this 'smoke trail' that's a skirted lure's most important attention-grabbing feature.

The effectiveness of a skirted trolling lure can be enhanced by adding either a narrow fillet cut from the flanks of an oily fish - mackerel or tuna for example - or by rigging a whole baitfish.

The usual candidates for this, each of which must be rigged in a specific way to prevent it spinning, are squid, ballyhoo and sprats and flyingfish. We though, will rely on the proven fish-catching ability of our unadorned skirted trolling lure.

Doubling our Chances with a Tuna Feather

So with that one set short off the windward quarter, let's try a smaller lure set longer off the leeward quarter. The larger trolling lures should always be set closer to the boat, the theory being that no fish is going to swim past a large bait to get at a small one.

We'll give one of the Tuna Feather Trolling Lures a go. Similar in construction to an octopus skirted trolling lure, these sport a weighted head and a skirt made of feathers - and they don't just catch tuna.

It's common practice to slide a muppet, or small octopus skirt, over the head of a tuna feather to bulk it up a bit and increase the smoke trail.

If you choose to do this, select a muppet that fits snugly over the head of the tuna feather and trim off the plastic 'tentacles' such that they don't completely mask the feathers. 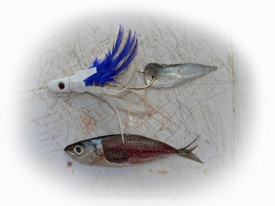 Baiting the hook will add a fishy scent

But we'll leave ours 'as is' and add a whole fillet cut from the side of a sprat.

This sprat is actually a threadfin herring, caught earlier while jigging a set of Sabiki Bait Rigs when at anchor.

It will exude delicious (to a fish) flavours in the bubble stream, but it will soon wash out and need replacing. 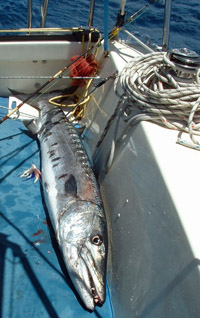 A 50lb baracuda caught from my sailboat 'Alacazam'

Incidentally, however you cut the fish strip, be it a whole fillet like as shown above or just a small sliver, always hook it through the forward end (as it was on the fish) so that the flakes of flesh align with the water flow.

Otherwise, very quickly, you'll be left with nothing but skin on the hook.

So now with two trolling lures smoking away nicely astern, either side of Alacazam's wake, we'll just wait and see what happ...

Wow, that didn't take long - the tuna feather's been hit.