Here's How to Fillet a Fish

It was my dear old grandmother who first showed me how to fillet a fish. It would have been a herring, which in those days were still plentiful in the North Sea - we had them for dinner every Friday.

The first requirement for filleting fish successfully is a good quality filleting knife with a flexible, finely honed and razor sharp blade.

The second? A cut-proof glove - and the third's a good surface to do the filleting on.

On our sailboat Alacazam we use polyethylene chopping boards, the largest of which isn't nearly big enough.

A proper fish cleaning table would be the thing if I could find somewhere suitable to fit it, with a pressure water supply right next to it. Oh well, never mind.

But I'll quit dreaming and get back to showing how to fillet a fish! 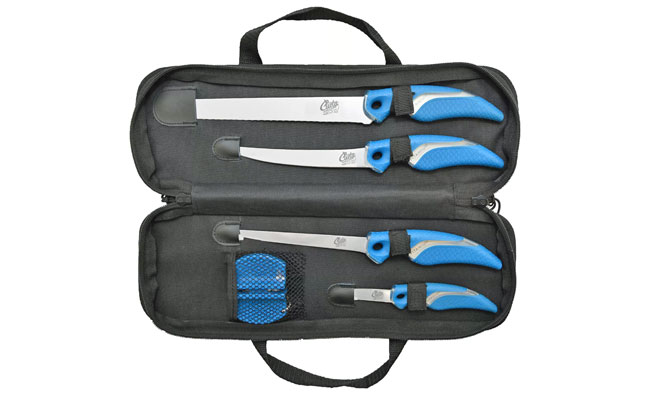 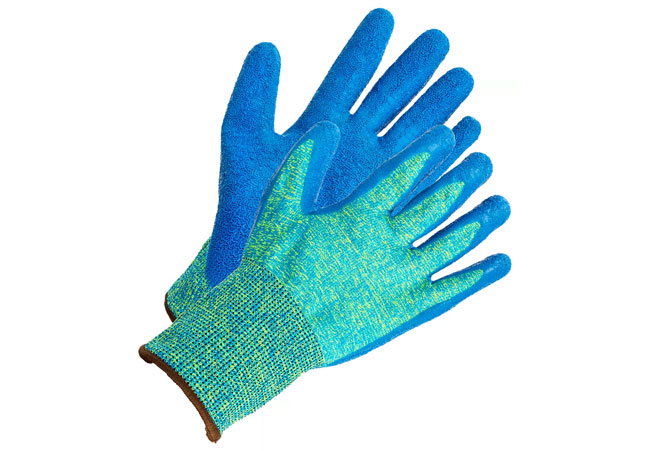 How to Fillet a Fish ~ Smallish Ones

Having already all the fins and removed the scales, let's see how to fillet a fish.

First, a small one - say, a mackerel or school bass (but remember minimum size limits). 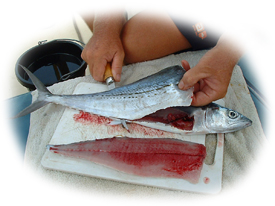 The second fillet being cut from a Spanish Mackerel

Were it not for the shame and humiliation, I'd name the angler in the pic on the right who isn't wearing a cut-proof glove...

How to Fillet a Fish ~ Now a Larger One

For filleting fish larger than this you'll need to modify step three as follows:~

How to Fillet Flatfish

Filleting fish like plaice and other flatfish is done slightly differently. Incidentally, flatfish start out life in a normal vertical plane but at an early stage opt for a horizontal lifestyle on the seabed. This makes one of their eyes largely redundant, so it migrates around to the upper side where it can be of use.

Flatfish are best cooked whole - or filleted like this:~ 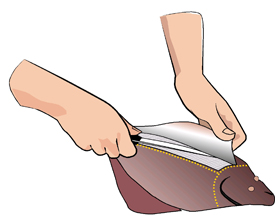 The first fillet being cut from a flatfish

So that's how to fillet a fish, but not all fish are best dealt with in this way...

There's nothing very difficult about filleting fish, but for large, round section fish such as tuna and wahoo, cutting them into steaks (or cutlets) about 1" thick is a better option.