Baitcaster reels are the smallest type of conventional reel. Conventional reels designed for freshwater casting are always baitcasters, but the definition when applied to saltwater fishing is pretty vague.

Some saltwater anglers describe level-wind surfcasting reels as baitcasters, whilst others are happy to call all reels of this type traditional reels. Here in the UK we have no such problem - they're all 'multipliers' to us!

Baitcaster reels tend to be wider and sit lower on the rod than conventional reels, to aid the stability of the casting outfit.

My first baitcaster reel was an Abu Ambassadeur 6000c - still made today, but this was a long time ago. Misguidedly, I removed the sleeves from the centrifugal braking system in the belief that it would give me additional distance.

Perhaps it did at times, but I can still remember the frequent birdsnests of biblical proportions and the lost fishing time that went with them.

Some baitcaster reel manufacturers use a reel size system based on that developed by the Swedish company Abu in their range of Ambassadeur reels, with sizes from 5000 to 10000 like this:~

Other manufacturers use their own sizing grades, often based on line strength or spool capacity.

Reels intended for line class fishing under IGFA Rules are normally referred to as big game reels, and are classified as being size 12, 20, 30, 50 or 80lb class reels to be used with lines of according breaking strain.

This is closely related to reel size, reel manufacturers normally quoting the maximum length of mono line of a specific breaking strain that can be wound onto the spool. This won't hold true for the much thinner braided lines - for these lines you need to know the line length/line diameter information to get an idea of how much braid you can get on the reel.

As a rule of thumb, the line should be loaded no closer than to within 10mm of the lip of the spool.

Not all baitcaster reels use a button to disengage the spool for casting - some go for a spool release lever instead.

The spool is disengaged automatically by a turn of the handle with the button type, which then pops back up, but the lever type has to be operated manually. The lever type is considered to have the better watertight integrity - but both types have their fans.

Some kind of spool braking system is essential if a lot of good fishing time isn't to be lost while you sort out birdnests and backlashes, so most modern baitcast reels incorporate some kind of mechanism to discourage the reel from over-running.

Some baitcaster reels have a line guide which traverses back and forth across the spool both during the cast and on the retrieve.

Benefit? Well, you don't have to do the job manually with your thumb on the retrieve. But this isn't a difficult skill to master anyway, so you might want to consider the value of a levelwind system, as...

I'll leave you to decide - but I know what I think about them... 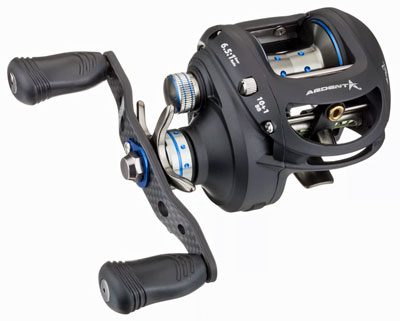 It's important to get this right - too tight and the spool won't spin freely, too loose and your line will get into the gap between the lip of the spool and the end plate which can be the very devil of a job to clear without taking the reel apart.

Then stop. That's it, it's correctly adjusted.

The small diameter spool of baitcaster reels means that some kind of gearing must be incorporated such that the spool rotates several times for each turn of the handle - otherwise the rate of line retrieve would be abysmal. This why baitcast reels are called multipliers (or multiplying reels) here in the UK and elsewhere in Europe.

Gearing is more of an issue on surfcasting reels and boat reels than on smaller bait casting reels. Shore casting over rough ground, a high rate of retrieve will help you keep your terminal tackle clear of the snags, and a low gear will make hauling in a large uncooperative fish easier on the arm and shoulders. The retrieve ratio on a reel of this type would typically be between 4:1 and 5:1.

A power handle, with its choice of attachment points, will also contribute to a rapid retrieve.

One Speed or Two?

Dual Speed reels are ideally suited for trolling and deep-water wreck fishing, particularly so if coupled with a lever drag.

Typical dual speed ratios would be around 3:1 and 6:1, as on the excellent Daiwa Saltist shown here.

Drag systems allow a large, fighting fish to take line in a controlled manner such that - in theory at least - it can never put enough tension in the line to break it.

Either type of drag system is a clutch mechanism which can be set between 'full on' which allows no slip, and 'full off' which allows line to be drawn off the reel with little resistance. Setting this correctly will limit the tension that the fish can induce in the line, absorbing the initial shock loads and practically eliminating break-offs. Lighter, and hence less visible line can be used as you're no longer dependent on the ultimate strength of your rig to resist the power of a hooked fish.

Often called a ratchet, this is an audible clicking mechanism that warns the angler that line is being drawn off the spool.

Its primary function is to announce the presence of a fish on the line, particularly when trolling, although it's also useful when tackling up as it prevents over-runs as you pull the line through the line guides.

Caring for your Baitcaster Reel

Looked after in this way, a high quality baitcaster reel may well last you a lifetime.

Any fishing reel, be it a conventional reel or a fixed spool reel, will be the most complex mechanical item - and likely the most expensive one - in your tackle box.

As such, it will pay in the long run to choose with care and buy the best you can afford.