Commercial big game charter fishing boats, festooned with trolling rods and outriggers use their enormous power to speed far offshore to go trolling for fish like these latter species.

Sportfishing boats, smaller versions of their big game cousins can be sufficiently seaworthy to get into all but the largest billfish.

And yachtsmen too, on passage far offshore, take great fish with simple trolling gear. But just what kind of gear is required to go trolling for fish?

Trolling For Fish with a Simple Handline

For all but the largest, fastest and most powerful gamefish probably more fish are caught the world over on handlines than by any other angling technique.

The fact that it's not very sporting or much fun isn't a concern for commercial fishermen, but there's no doubt that trolling for fish with a handline can be a very productive technique indeed.

For offshore sailors though - and anyone else more interested in getting something to eat than the thrill of playing a fish on rod and line - trolling with a handline clearly has a lot going for it.

However, for sport fishermen, handline fishing holds little attraction. They require the thrill and excitement of playing hard-fighting gamefish on properly balanced rod and reel outfits.

These rods are normally between 5.5ft (1.7m) to 7ft (2.2m)long, and are equipped with roller guides throughout or ring-type line guides of the highest quality.

Trolling rods have slotted butt ends for location in either a butt pad worn around the angler's waist, or a gimballed socket in a fighting chair.

read more about reels of this type...

What Type of Trolling Lure Should I Use?

There are four main types of lures to use when trolling for fish offshore - skirted lures, spoons, plugs and soft-plastic lures.

Each will have their moment of glory, but skirted trolling lures are the most commonly used.

Unlike the other types, skirted lures are made up of several components - the hook, the replaceable skirt, beads to position the hook correctly within the skirt, the lure head (the design of which determines how the lure behaves in the water) and the line (which could be wire for toothy fish) upon which the lure is rigged.

Spoons are often used with trolling planers or downriggers, when trolling for fish that hunt their prey at depth.

Plugs are designed such that individual models will skitter along the surface (topwater lures), others will dive to a few feet below it (shallow divers), whilst others - characterised by a large lip-like diving vane - will get down 20 feet or more (deep divers).

Soft plastic swimbaits are modelled on various types of baitfish and are the most lifelike of all trolling lures; they 'swim' very convincingly. There are no doubts as to their effectiveness, but they soon get beaten up after receiving the attention of a few good fish. A shame this, as they aren't cheap.

What Type of Line Should I Use for Trolling?

Nylon monofilament line is by far the most popular choice for trolling. It's fairly stretchy stuff by nature and relatively inexpensive. It's elasticity though, is both good and bad because:~

Braid line is almost stretch-free and is ultra-thin, so hook sets are normally rock solid and it's easier for the angler to keep in touch with the fish. You'll also be able to get much more line on the reel, maybe to the extent that you could go down a reel size. But you'll need arms and shoulders like a body-builder to handle it. To lessen the pain, many anglers use a long nylon monofilament leader with braid line.

Most anglers use nylon line for rigging their lures, but there is a significant benefit to be gained by using fluorocarbon line for this, as this type of line is almost invisible under water.

How Far Astern Should I Tow The Lure?

Offshore fish are less timid than their inshore brethren and can be attracted to the disturbance caused by a boat and often trail close astern.

So when trolling for fish of the open ocean big game charter boat skippers, who are well aware of this, place their closest lures in their own stern wave. And they always try and place their lures in the front face of the wave where it performs at its best.

Sailboats and small motorboats don't generate a stern wave of any significance at trolling speeds, so when sailing offshore and trolling for fish with a single line, we normally place the lures between 15m and 30m aft of the boat - and eat well.

What is The Best Boat Speed for Trolling?

Well it depends on what you're hoping to catch. When trolling inshore for bass 2 to 3 knots is about right, for mackerel maybe 2 to 4 knots. Trolling for fish that patrol the currents of the open ocean, like tuna, wahoo, dorado (aka mahé mahé, mahi mahi or dolphin fish), kingfish and their large mackerel cousins, 5 to 8 knots seems to do the trick.

Should I Fish with the Lure on The Surface, or Below It?

Offshore, most fish can be caught close to the surface, as this is where the baitfish tend to congregate. In fact, if you're using a skirted lure it will usually be most effective if it breaks the surface occasionally. But unless your lure is specifically designed to operate as a topwater lure it should remain a few feet below the surface most of the time if it's to deceive the fish.

How Can I Get the Lure Down Deeper?

At times, the baitfish will be found at greater depth, so you'll need to get your lure down deeper. Adding a trolling sinker will keep your lure sub-surface, but the faster the boat speed, the less effective these sinkers become. One way of getting your trolling lure down 10m or so is to use one of the deep-diving plugs such as those manufactured by Rapala or Yo-Zuri, or - you could use a planer.

For getting their lures down really deep, sportfishing boats use a downrigger. This is a crane-like structure located on the after-deck which is used to lower a heavy lead ball on a wire line to the required depth. The trolling line is attached a few feet above the trolling ball with a quick-release clip, which lets go immediately a fish strikes. This is all very well on sport-fishing boats, but less than ideal on a sailing boat or a small sea angling boat. There is another way to achieve a similar effect without the inconvenience of the lead ball - the mini-downrigger.

Trolling for Fish with a Wire Line Outfit

Alternatively, you can use a wire line set-up. Wire gets to greater depths than mono or polyester because its greater density makes it sink more rapidly, while its smaller diameter (for any given strength) creates less drag.

How Can I Attract Fish to My Lure, and Encourage Them to Take a Grab at It?

However attractive your lure, it won't catch fish if they don't know it's there.

A bird teaser will make a big difference when trolling for fish that hunt near the surface.

These decoys mimic the disturbance made on the surface by a shoal of baitfish and, in doing so, attract predatory fish to the vicinity of your lure.

Will Deploying a Second Trolling Line Double My Chances of Success?

Your chances of a hook-up will certainly be increased if you have a selection of lures deployed. Here's why ...

A typical offshore sportfishing boat will often use up to seven trolling rods, with long outriggers hauled out each side to spread the lures over a 15m wide swath of the ocean. The lines are attached to the outriggers by quick release clips, which release the line when a fish hits the lure. Some lures will be set short - that is, close to the boat - whilst others set long, with each lure's position carefully adjusted to put it in the face of one of the series of following waves generated by the boat itself.

The one on the centreline - the shotgun lure - is the furthest aft, intended to entice any curious onlookers at all the activity ahead. A general rule is that the larger, most active lures should be closer to the boat - conventional wisdom dictating that a fish is disinclined to swim past a large offering to get to a small one.

Now I'm not suggesting that sailboat skippers should go trolling for fish with their boats festooned with rods in this fashion, but one from each corner of the transom is a reasonable proposition for a monohull. This is what we have on Alacazam, with a teaser spreader bar set on the centreline. If conditions are right, we use the taffrail mounted reel as well, with a bird teaser and a squid daisy chain set short. Multihull sailors will have even more options. 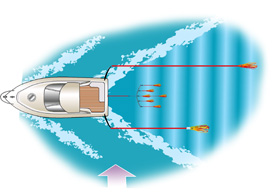 Just two lures, but with a 'shoal' of teasers on a spreader bar

If you do opt to go trolling for fish with more than one lure, you need to take the wind direction into consideration.

The higher the rod tip is, the greater length of line there is exposed to the force of the wind.

With the wind on the beam, the lines get blown down to leeward, so to keep them apart the windward lure should be closer to the boat.

If you don't want to increase the distance behind the boat of the leeward lure, you can bring the windward one forward by passing the line through a quick release clip attached to a low point on the transom. This will reduce the length of line clear of the sea and allow you to position your lure closer to the boat. If you need to tack or gybe, you'll have to adjust your lines accordingly. Incidentally, trolling is usually much more productive when off the wind and in the quiet hours just after dawn and as dusk is setting in.

Deadbaits can be used with great success in place of lures, provided they are rigged correctly. The principal bait rigging requirement is that they must not spin as they are drawn through the water, or they will be ignored completely. And this is how it's done for ballyhoo, squid, sprats and flyingfish.

And Last, But Most Definitely Not Least ...

The sea can be a treacherous mistress and makes no allowances for beginners. All boat skippers should possess an adequate level of navigation and seamanship skills. Whilst it isn't within the scope of this website to get into this topic, I must stress the importance of taking it very seriously indeed.

One of the features of saltwater trolling for fish is that often all eyes are looking aft, particularly when a fish is on. Remember to keep a lookout at all times - it's a legal requirement when inshore fishing, offshore fishing, or on your way to or from the fishing grounds.

So if you're a boat owner and haven't yet done so, please at least get a good book on the subject (the one shown here takes some beating) and consider attending one of the power-boat courses run by The RYA (www.rya.org.uk).

Apart from any personal considerations, you owe it to your crew.