Going about ballyhoo rigging the right way is vital, or your hook-up rate will be pretty dismal. Their beak, and elongated shape does means that a special approach is required.

Most important is the position of the hook. If it's too far forward you'll be retrieving half a ballyhoo more often than not. This rig will put the hook well towards the tail of the ballyhoo, and well into the mouth of the predator.

First though, as with all baitfish, the ballyhoo must be prepared before the rigging procedure can begin, otherwise it won't wriggle convincing - and worse, it will probably spin.

Here's how to make sure it will behave as it should ...

To resemble their living brethren, dead bait fish must 'swim' convincingly - they should wriggle, but not spin. And for a lifelike wriggle, the bait fish must be flexible. And here's how to make it so ...

This is an essential part of the ballyhoo rigging process. Now your baitfish is limp and flexible, and ready for rigging.

Having loosened it up, the ballyhoo rigging process can begin. But just one more thing. Break off its beak leaving a stub of about an inch (25mm) - you'll see why shortly. If this is done by snapping carefully downwards, a useful groove will be left on the underside of the stub.

The ballyhoo rigging technique described here uses a head spike (or head-pin) which is a vertical spike of single strand wire, incorporated into the extended haywire twist used to attach the hook in a single-strand wire leader. So, let's get started...

First, attach a suitably sized hook with a haywire twist.

Don't snap off the wire in the normal way, but leave a spike sticking up in the same vertical plane as the hook.

Note ~ In the illustration the haywire twist is too short. My fault, I'll change it as soon as I can.

Then, insert the hook point under the gill cover and work it through into the body cavity.

Bring the hook point out through the belly, leaving the spike under the bait's head.

After checking that the hook and the spike are in the same plane, push the spike up and out through the top of the head level with the eyes.

Next, check that the hook moves freely where it exits the fish's belly.

If it doesn't, carefully cut a longitudinal slot at the point of entry with a sharp knife so that it can.

Note ~ As the haywire twist is too short in the illustration, the hook exits in the wrong place. Done correctly the hook would exert just over halfway down the fish.

Alternatively, you can use monel or light copper wire instead of the elastic band.

Poke the wire through the eye sockets, wrap the ends around the head behind the spike and finish off with a few turns around the bill stub, which will locate the leader in the groove we mentioned earlier.

The hook and the head-spike must all be on the centreline in the vertical plane, or the bait will spin.

Hold the leader and let the bait hang down. Double-check that the hook's not pulling on the belly.

Properly rigged, the bait will be towed by the head spike and won't spin. If it does, tweak the rig until it doesn't or start again.

Rigged in this way, your ballyhoo will skip along, or just under the surface. If you want to troll deeper, slide an egg sinker down the line to the head of the bait, and secure it in place with soft wire.

The final embellishment is to slide a lure - such as sea witch, trolling feather, straight runner, clone, jethead or simply an octopus skirt - down the leader so that it locates against the egg sinker if you're using one, or the nose of the bait if you're not.

But if your target fish is dorado or tuna, you may want to take your chances with wahoo and their toothy chums, and go for a less visible mono leader.

80lb breaking strain is as light as you should go, using one crimp to secure the hook and another to attach the separately formed L-shaped spike in the appropriate position. A chin weight can be incorporated into the crimped hook connection if required.

If you haven't already got it, you're going to need a Crimping Tool and a selection of suitable sleeves. This rigging kit comes well recommended... 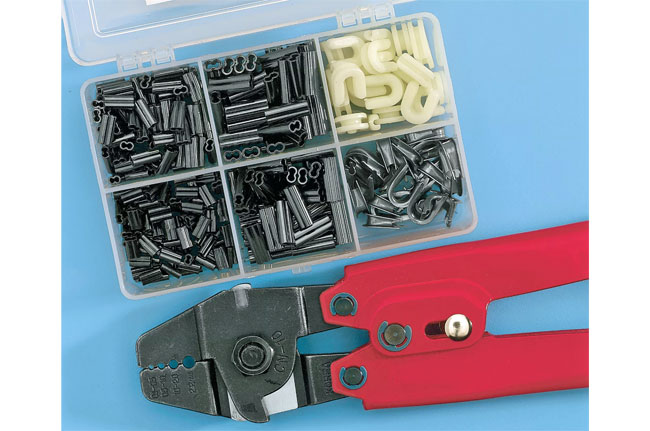 Follow these carefully and you'll soon be an expert!