Spreader Bars are a logical extension of the daisy chain, which is simply a string of teasers (decoy lures) rigged in line-astern formation to add some attention grabbing attraction to your trolling lures.

In fact it could be said that they're nothing more than an array of daisy chains attached to a stainless steel - or titanium - bar to give the 'shoal' some width.

Dredge Bars (or dredges) take it to the next level again. Using a framework much like that of an umbrella enables a 3-dimensional 'shoal' of teasers to be created.

Spreader bars and dredges are always towed on their own separate line - you certainly wouldn't one of these being dragged all over the ocean by a fighting fish. 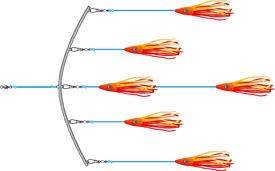 This one is rigged with six hook-less decoy lures.

The sketch on the right sets out the basic form of a spreader, showing that they're just a series of daisy chains rigged on a stainless steel bar.

In reality, the bars are up to 4ft wide and can deploy about 15 decoys, adding width to the 'shoal' of individual daisy chains, which really gets the attention of any predators cruising in the vicinity.

Heavy, substantial arrays of teasers like these are intended to be rigged on their own lines, with the aft-most teaser often trailing a snaplink rather than being a chaser with a hook in it.

The Williamson 'Live Ballyhoo' Bar shown here in one such type.

The idea is that you connect your leader a short distance ahead of your lure directly to the snaplink with an elastic band.

When a fish hits your lure, the elastic band breaks leaving you clear to fight it without the entire contraption being dragged around with it. This would be a good time to get it back aboard before something else eats it.

You can either buy them fully rigged, often complete with breathable storage bags, or as just plain spreader bars for you to rig yourself.

In this latter case plastic squids will probably be your choice of decoy lures as they're considerably cheaper than the soft-plastic swimbait versions. Rig them as you would for a daisy chain.

Next comes the Dredge Bar - also known as the Umbrella Rig - which is rather like a three-dimensional array of daisy chains. And these too must always be towed on their own line - and if they do have a lure attached it will be by the snaplink and rubber band technique previously described.

But unlike spreaders, they're designed to operate below the surface and may need an in-line trolling weight to keep them at the correct depth. Dredges pull daisy chains of teasers of four to six radial arms spread out around a central pull point, much like the structure of an umbrella.

Some versions combine spoons with the soft-plastic teasers, for even greater sonic alarm signals.

With one of these you have your own bait-ball swimming astern.

Many sport fishermen will tell you that a dredge bar such as this is one of the best ways of attracting billfish and enticing them to take your lure.

So they're effective then? Yes, definitely.