Plastic Squid Lures are moulded latex lures designed, not to catch squid, but to look like one. Squid being on the 'healthy eating' list for most saltwater fish, they deserve a place in our lure bags.

Small squid lures, which we in the UK call 'muppets', are usually fished unweighted on dropper loops along with a metal jig for vertical jigging over wrecks, reefs and broken ground where cod and pollack will attack them enthusiastically.

Mid-size plastic squid lures, particularly those that are impregnated with a fish-attracting scent oil, perform well on carolina rigs.

The larger bulbhead plastic squid lures are usually reserved for trolling offshore, where they're fished either as surface skippers, or weighted for trolling at depth.

Like all soft-plastic lures, squid lures soon get beaten up after a fish or two, but they're fairly inexpensive, so having a number of them in various colours and sizes shouldn't break the bank.

In those parts where big game fish patrol the seas, these are used as replacement squid skirts on smaller trolling lures.

Here in the UK, we call them muppets and use them primarily for vertical jigging.

Most anglers would choose to use no more than three, together with a metal jig performing both as a lure and a sinker.

Here one is shown attached to a dropper loop, but there is a better way as you'll see a little further down this page.

Tip ~ Change that treble hook for a single!

If you keep getting hooked up on anything other than fish, replace the metal jig with a pear lead on a rotten bottom.

You'll be less likely to get snagged, but even if you do - and end up having to pull for a break - it will be cheaper!

One Way of Rigging a Muppet

First make up the rig with dropper loops, as in the illustration above, tying them quite long - around 4 inches (100mm) or so.

Then, they'd push the hook point through the nose and continue to thread the hook through the lure until the eye of the hook was concealed inside its head. 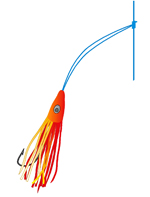 No? Why's that then? Well, it looks fine until it's been in the water for a while, after which time the drag of the water will have pulled the plastic squid lure over the hook eye leaving it bunched up around the bend of the hook.

Then, in the unlikely event of a fish taking a grab at it, it'll pull back through the hole and it's goodbye to muppet and fish, to the intense disappointment of all involved.

After all, if the hole in the nose was large enough to push the hook right through when rigging it, it'll come as no surprise that it's still large enough when the hook is on it's way back out.

A Better Way of Rigging a Muppet

After tying the dropper loop and before doing anything else, snip off one part of the loop close to the knot, leaving a short tag end.

This converts the loop to a stand-off snood of around 8 inches (200mm) or so.

Now make a small hole through the nose of the muppet with a needle - or better still a hot wire, which would seal the edge of the hole - then thread the end of the snood through the hole, slide on a small bead and tie on the hook with a uni-knot.

Always include a small bead when rigging a muppet 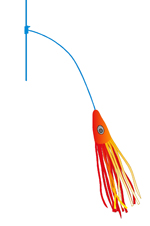 The bead will then sit nicely inside the head preventing the hook from pulling through and leaving the hook-point about two-thirds of the way back, where it should be.

An alternative to the dropper loop approach to making a snood is the arrangement shown here.

A swivel, a couple of beads and a circular section sleeve crimped on either side to locate it in place.

These artificial baits are as close to the real thing as you can get. Not only do they look like it and feel like it, they now smell - and presumably taste - like it too.

But don't assume you can leave them motionless in the believe that a fish will snap them up as a fresh, but dead, squid.

They won't; they're likely to ignore them completely. You must give them some movement, either

Over the years the Bulbhead Squid Lure, often known as a Tuna Clone, have become firm favourites with offshore trollers the world over. Not just as lures, but also as the teasers on daisy chains and spreader bars.

This is one i made up myself. It's rigged on single-strand wire, connected to a double hook by a haywire twist.

The lead sinker is snugged up tight inside the head of the lure.

The haywire twist is made to length such as the hook is correctly positioned within the lure skirt.