What to Look For In
Fishing Boat Anchors

In a way, the performance of fishing boat anchors - from a safety point of view - isn't as crucial for boat anglers as it is for other recreational boaters. Why? Well let me explain...

Boat anglers need their anchor to hold them in position over their chosen fishing mark.

If the anchor drags, OK it's inconvenient, but it's not life threatening - you just bring in your gear and anchor again.

But for yachtsman or power-boater who may have anchored overnight in a crowded anchorage, or left his boat at anchor unattended while he and his crew go ashore or - worst of all - caught at anchor in an onshore gale, absolute confidence in the security of his anchor is essential.

Pretty much all of the published recommendations regarding anchor weight, chain or rope and length of scope is given with such situations in mind, but for 'fishing at anchor' applications the following guide - and I must emphasize 'guide' - should suffice:~

Equally as important as the fishing boat anchors themselves is the anchor rode, not just its size or the material it's made from, but the length of scope deployed - and this is why...

Fishing boat anchors like to lay almost buried, ideally undisturbed. They can rouse themselves to resist a steady horizontal pull, but a sudden jerk and they'll either drag or roll over and give up completely.

These shock loads are caused by waves and sudden gusts of wind. It's down to the rode to absorb these loads, and it's achieved through:~

Chain rode is not practical on a fishing boat due to handling and storage issues, particularly as it's likely to be deployed several times on any fishing trip.

Nylon rope is the stuff to use - never polypropylene, which floats and will if given half a chance get caught around the prop at slack water. However, it's a very good idea to have around 5m or so of chain hitched to the anchor for a couple of reasons:~

If the scope deployed is too short, any snatching at the boat end will be transfered directly to the anchor and hey, we're off ...

If you let out around 5 times the depth of the water the anchor should hold fine in most conditions.

Awkward to stow anywhere other than in the stemhead fitting, the Bruce Anchor has a reputation as a good all-round fishing boat anchor in most seabeds.

One of these resides in the bow roller on my boat and is generally reliable, although I have had difficulty getting it to dig-in on hard shingle seabeds.

One good attribute of the Bruce Anchor is that it will turn and reset itself when the tide turns.

There's no fishing boat anchor that holds better than a Danforth Anchor on sand and mud, but on most other seabeds it doesn't perform well at all.

It folds flat and stows well below decks or in a fore-deck anchor locker, but won't stow well in the stemhead fitting.

There are several light-weight aluminium anchors based on this design, but with larger flukes, that are said to perform similarly but which are more convenient to handle.

Handle with care or it will pinch you fingers.

The CQR Anchor has a well-deserved reputation for reliability - in fact, if there is an all-round fishing boat anchor, this is probably it.

Its patented swivel system allows it to accommodate wide swing angles before it has to reset itself.

Like the Bruce Anchor it stows well in the stemhead fitting, but is only marginally easier to stow anywhere else.

And in common with the Danforth Anchor it will pinch your fingers at the slightest provocation.

Like the Bruce, the CQR will usually align itself successfully when the tide turns. 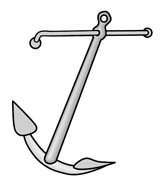 After the large rock on a rope, the Fisherman Anchor is the oldest of all fishing boat anchor designs. The stock can be released so that it can lay alongside the shank, making it an easy anchor to stow below.

But with the stock fixed it's anything but convenient - as you'll know if you've ever tried to get one out of the water and onto the foredeck.

In rock and weed nothing beats a Fisherman Anchor, but in other situations it relies largely on its weight rather than its hold on the seabed.

In the table above, you should go up at least one boat size to get the weight of a suitable Fishermans Anchor.

Like the CQR Anchor and the Bruce Anchor, the Delta Anchor is a plough anchor type, but unlike the CQR it doesn't have the pivoting arrangement.

This does detract from its performance somewhat but it is less expensive.

Lightweight aluminium versions mean that you can go up a size without having to cope with additional weight.

The Spade Anchor is one of the new breed of anchors, that many satisfied ownwers will tell you outperforms all the others.

Like the Fisherman Anchor, it's a two-part design which can be disassembled for convenient stowage in a locker, but in use it will stow neatly in the stemhead.

It's balanced such that it always arrives on the seabed point down, which enables it to set very quickly.

Known as the Wasi Anchor in the US, this German design from the early 1990s is the forerunner of the new breed of anchors, and the first to sport the rollover bar.

It's a simple design which keeps manufacturing costs down, but still provides excellent performance in most seabed conditions.

Like the following design it will bury itself and turn to accommodate changes in tide and current without breaking out.

Have we left the best till last?

In my view yes; the Rocna Anchor is the all-round winner.

Designed in New Zealand, The Rocna Anchor been around since 2004 and has become a favourite of boaters worldwide.

It combines the basic design of the Bugel Anchor with the sophistication of the Spade Anchor and in all the anchor test reports I've read comes out on top.

Like the Bugel Anchor, it's of one-piece construction and is designed to live in the bow roller as it's most awkward to stow it anywhere else.

The Rocna Anchor is immensely strong, has superb holding power and is one of the very best anchors currently available.

Made by the same people that designed and manufacture the Rocna, the Vulcan is intended for powerboats where the Rocna's roll-over bar prevents self-stowage on the bow roller.

It's said that the Vulcan provides the same legendary holding power as the original Rocna of the same weight.