Downrigger Planers - How They Work and How to Use Them

Neat devices, downrigger planers. They use the force of the water to drag your trolling lines deeper, unlike heavy lead downrigger weights which rely on gravity alone.

Planers come in several sizes, the smaller ones for low speed trolling with small lures, and the larger ones for, well yes, you've guessed it - faster tow speeds and larger lures.

They're an alternative to heavy downrigger weights - those spherical, finned devices weighing upwards of 10lb.

If you, like me, do most of your trolling from a sailboat, my guess is that you'll go for the much lighter and easier to stow planers.

However for power-boaters, who stay upright most of the time, then you may decide otherwise - and probably will, particularly if your boat's equipped with an electric downrigger.

How do Downrigger Planers Work?

To understand this, we should take a look at their two main elements - the plate and the bridle/counterweight assembly as seen on the Sea Striker Downrigger Planers shown below... 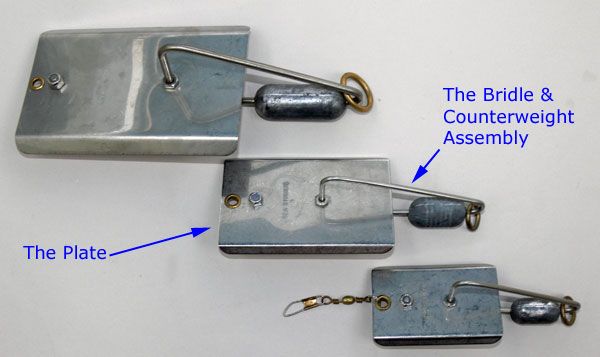 As the downrigger planer is drawn though the water a force is generated on the top surface of the rectangular stainless steel plate which drives it downwards.

The hole on the trailing edge of the planer is for connecting a quick-release clip for your trolling line.

Generally speaking, the greater the area of the plate and the faster the trolling speed, the deeper the downrigger planer will dive - but more on this a little further on. 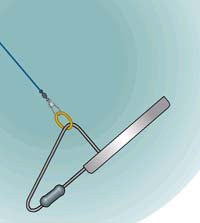 When a fish strikes, this happy state of equilibrium is disturbed - the quick-release clip lets go, but not before the planer balance is upset, the attachment ring relocates itself at the sharp bend at counterbalance leaving the planer dangling uselessly. All downward force is now a thing of the past until it's re-set.

In this 'tripped' position the planer can be recovered easily ready for re-attachment to the trolling line when required.

Tripping and Re-Setting the Planer

If the planer didn't trip itself, it will strongly resist being hauled physically to the surface. To trip it manually, just pull in a few feet of line - and let go. It might take a few attempts, but it does work.

To re-set it, repeat the pull-in/let-go process.

Click here to find out how to re-deploy your trolling line without having to first retrieve your downrigger planer.

How Deep can Planers Get?

The depth to which a planer dives depends on the area of the plate, the speed of the tow and the length of the planer line.

Theoretically, for any given size of planer and constant towing speed, the more planer line you let out the deeper the planer will dive.

So if letting out 20m of line gets you down 10m then 40m will get you twice that depth. Ah, no. Sadly, the law of diminishing returns says that it won't. The more line out, the greater becomes the line drag, which lowers the planer's angle of attack and eventually trips it.

The optimum distance/depth relationship ultimately depends on the diameter and density of the planer line, and can only be properly assessed by trial and error. 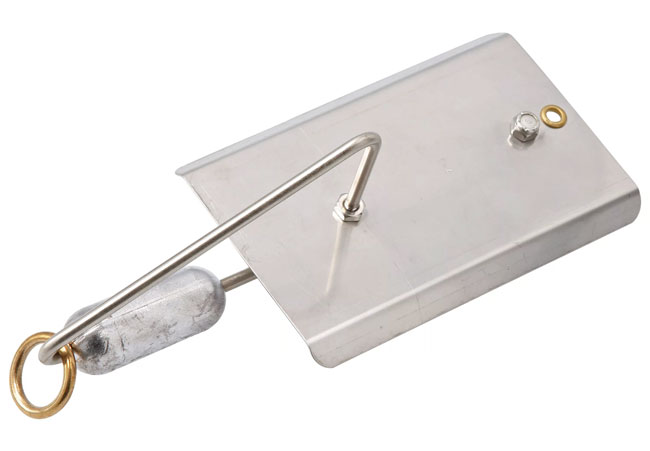 Planers aren't only for use with downrigger gear - they're ideal for offshore trolling handlines too, when you want to get your lure down deeper.

Always attach them well ahead of the lure, so that they don't spook the fish - a 30ft (10m) leader isn't excessive.

Attach the leader to the hole on the rear edge of the planer with a snap swivel.

Use either a largish trolling spoon, or a sinking diving plug - particularly those with internal rattling beads and an aggressive action.