Not so long ago many of us would be using surf casting rods manufactured from a hollow fibreglass blank which would be around 11 feet long - and by today's standard they were heavy. But in recent years, there's been something of a revolution...

It's the developments in carbon-fibre technology and state-of-the-art manufacturing processes we have to thank for these advances.

Now affordable surf rods of up to 16ft are enabling anglers of even modest casting ability to achieve distances that would have challenged the most expert surfcasters of just a few years ago.

Surf casting rods (often with trigger grips) are designed to be used with a baitcaster reel fitted on top of the rod, while spinning rods are intended for use with a spinning reel hung below the rod.

In the UK they're all known as surf rods, and are marked with either an 'M' (for 'multiplier' reel, or baitcaster as they're known in the USA) or 'F/S' or 'S' (for 'fixed-spool', or spinning reel) indicating that they're designed for used with a either a spinning reel or a multiplier reel - but not both.

So surf rods designed to be used with spinning reels have relatively few rod rings, but the one nearest the reel will be large diameter with the others becoming increasingly smaller as they progress towards the rod tip.

So surf casting rods designed to be used with multiplier reels have relatively small diameter rod rings, but there are more of them and they're closer spaced. 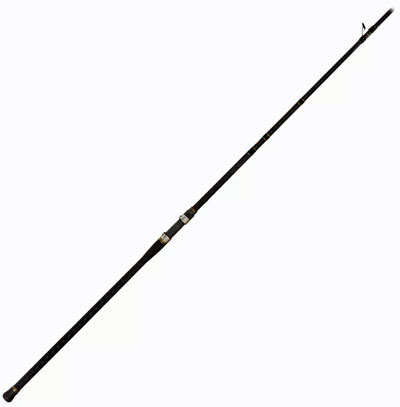 Some manufacturers proudly proclaim that their surf fishing rods 'can be used with both multipliers and fixed spool reels'.

And so they can, by incorporating rings that are both large and plentiful - but they'll never achieve the distances of surf fishing rods specifically designed for one or other of the reel types.

Surf casting rods designed for use with multiplier (baitcast) reels, where the lead is swung through a wide arc in high energy casting techniques like the pendulum cast, will usually been built from a fast-taper blank, whilst surf rods designed for use with fixed-spool (spinning) reels, where casts are made from a standing start require a softer (or more 'through') action.

Surf Casting Rods start at around 11ft long and, like the Continental Surf Rods described above, can be as long as 16 ft. In general terms, the longer a rod is the further it will be capable of casting - in the right hands of course, and within the sinker weight range for which it was designed.

Depending on the country of origin, the marked rod length will be in feet or metres, but if you're not ambidextrous in the imperial/metric department, the table on the right will translate between the two systems.

Surf Casting Rods are usually marked the optimum range of lead weights that the rod will perform best with.

This doesn't mean you can't use a lead outside these ranges, but the rod won't load up to its optimum power for a lighter lead, and may be over-powered by a heavier one.

The weight range will be marked in either ounces (oz) or grammes (gr) - the table on the right will convert these units.

The most vulnerable items on any rod are the rod rings. All rods get dropped now and again, either by its fumble-fingered owner while tackling-up, or blown out of the rod rest or pulled over by a fish which hasn't read the rules of fair play.

So good quality rod rings are a must, and it's a wise angler who is suspicious of any but those of the highest quality, such as those made by Fuji or Seymo.

These will have ceramic liners such as silicon carbide, not just for superior robustness but also for the hardness of these materials. This latter property is essential to avoid grooving, particularly if super-braid lines are to be used.

The quality of the bindings that secure the rings to the rod are clearly as important as the rings themselves.

But they can be too long, particularly in the rods fast-tapered upper sections, where they will be more closely spaced which can stiffen up the action of this sensitive part of the rod. Some manufacturers overcome this with single-leg rings, which of course in careless hands can make them more prone to failure.

In the lower butt sections of the rod where hard spots are not such an issue, triple-leg rod rings double-whipped provide the ultimate in security.

Most surf casting rods have coloured tip section to improve bite detection in low light conditions. Even better are those that sport hi-viz reflective tape for night fishing.

Some manufacturers provide push-in quiver tips of various stiffnesses to provide the ultimate in bite detection - no self-respecting competition angler will be without a few of these!

But these are only really effective in calm conditions and relatively close range conditions. If it's windy, or there's much of a tide running, the quiver tip will be pull round and be a total waste of space.

How Many Rod Sections?

Whatever rod manufacturers may tell you, there's little doubt that a rods spigot joints are its weakest points. So the fewer of them the better - from the structural point of view any way.

But you'll probably have to get it in the car at some point, where a two-section 16 footer would be something of an embarrassment. 3 sections would be far more practical, unless you live on the beach and don't want to do your surf fishing anywhere else.

Some surf casting rods take this travel convenience to extremes, calling telescopic and multi-section versions of their rods 'travel rods'.

Well that's a fairly convincing argument for me, but it might just rule out the use of a baitcast reel.

Multiplier reels (aka baitcasters or traditional reels) were the first choice of most UK surfcasters until the modern super-braids arrived on the scene.

But they're not entirely suitable for braid as the coils of very small diameter line tend to bind into each other on the narrow diameter spool of the baitcast reel - with occasionally spectacular results in mid-cast.

Fixed spool reels (aka spinning reels) with their larger diameter spools and oscillating line lay mechanisms don't share this problem, so if you want to use braid line for surf casting, you might prefer to use a spinning reel - and a surf rod designed for it.

Watch this video and learn how to cast long distances with the pendulum technique...