Use the Running Ledger Rig to Catch Bottom Feeding Fish

The ledger rig (also known as the 'running rig' or even the 'running ledger') is the one to use to catch those demersal fish that spend their lives poking around on the seabed, feeding on worms, invertebrates and crustaceans - and any smaller fish that may be engrossed in the same activity.

In essence, it's a free-running rig in which the line can run through the ledger weight, such that a biting fish can indicate its presence by a nod of the rod tip without feeling any resistance from the weight.

And it's a versatile rig that can be equally well cast from the shore, dropped downtide - or cast uptide with a breakaway lead (of which we'll talk later) - from an anchored boat.

As shown in the sketch below, a second bait can be presented on a dropper a couple of feet up the line to pick up any fish feeding just off the bottom.

A 3-way swivel can be used here, in place of the dropper loop. 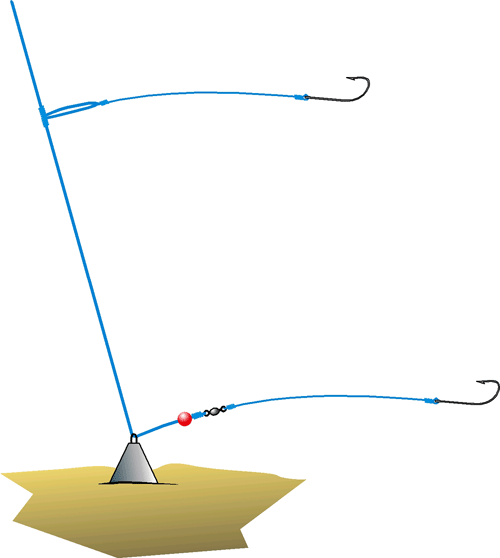 The basic running ledger rig, shown here with a flyer for fish feeding just off the seabed

Whilst the sketch on the right illustrates the basic principles of the ledger rig, in practice the lead sinker wouldn't be attached directly to the line as shown.

A running ledger rig with a plastic boom, which helps to prevent tangles on the drop

A snap-swivel - or more often a plastic boom as shown here - is used, which enables the lead to be easily changed to suit changing tidal conditions.

The ring-shaped 'gripper' lead on the right would be a good choice to stay put on most seabeds, but the torpedo lead is much less prone to tangling on the drop.

Ledgering from Boat and Shore

Three specialised forms of the ledger rig have evolved:~

This is the most popular method of fishing 'on the bottom' from an anchored boat. Not too challenging in weak tides, but that all changes when the tide really starts to run.

Some anglers persist in using old fashioned heavyweight gear which does nothing to help them catch fish - you know the sort of stuff, a stiff unresponsive rod, a reel of uncertain vintage loaded with thick stretchy mono line. When deploying the ledger rig in a strong tide with this sort of gear you're likely to have difficulty in keeping the rig on the bottom.

The problem is the pressure of water on the line, which is trying to stream it to the surface, lifting the lead as a result. One solution is to use an even heavier lead, another is to let out more line. Both of these 'solutions' create further problems. If you're having to use a couple of pounds of lead to hold bottom, you'll need a rod of broom handle proportions to handle it, and bite detection will become difficult, particularly in stretchy monofilament.

Letting out more line is usually self-defeating as it's the effect of the tidal flow on the line that's lifting the weight off the bottom - more line, a stronger lifting force.

The best solution is to use lighter tackle, not heavier. The angler fishing with the old-fashioned broom handle outfit will always be outfished by a colleague who's invested in a modern balanced outfit, like a 20lb class boat rod coupled with a lever-drag multiplier reel loaded with good quality 20lb braid line. These high-tech braided lines are much thinner than mono of the same breaking strain and have almost zero stretch.

These qualities enable more line to be stored on your reel, and greater depths with less sinker weight to be achieved due to the reduced drag of the thinner line. Its lack of stretch provides better hook penetration on the strike, and improves contact with the fish throughout the fight.

But unless your tackle is set up to offer some 'give' when a large fish makes a last, desperate bid for freedom - ie a light medium action rod together with a reel with a smooth drag - the non-stretch quality will work against you, testing both the hook-hold and your knots to the limit.

'Uptiding', as it's known, ensures that your bait stays hard on the seabed. Once again, best results are gained with light, specialised tackle.

Rods intended for uptiding are longer than normal boat rods, and are designed for use with a casting multiplier or fixed-spool reel.

A spiked 'breakaway' lead is used, which will penetrate the seabed and hold the rig in position.

In the model shown here the four spikes are individually attached and clipped in position on the detachable blue plastic head.

When the load on the lead reaches a certain point - a fish taking the bait for example, or the angler striking - one or more of the spikes unclips, rotates and loses its grip on the seabed.

As its description suggests, the rig is cast away from and uptide of the anchored boat. A bow of slack line is allowed to form between the rod tip and the spiked lead. Now, providing you've got the balance right, the pressure of water on the line will be pulling the spiked lead into the seabed rather than lifting it off it. When a fish takes the bait, the lead will trip as described above, and the line will go slack. Strike! - you've got him!

But there are a couple of safety issues with uptide ledgering, as casting spiky lead sinkers and sharp hooks from the confines of a boat can be something of a risk for the other occupants. So the anglers participating in it should be experts - there's no room for errors. And if the boat is crowded with anglers of widely varying skill levels - forget it!

The basic ledger rig wouldn't normally be the first choice for most surfcasters - one of the paternoster derivatives like the flapper rig would be a more likely choice, owing to its long casting and low tangle-risk attributes.

But at times, one of the ledger rig derivatives is by far the best option. The pulley rig for example, which goes a long way to avoiding hang-up when retrieving a fish over rocky ground.

Although long casting isn't always necessary, more often than not it is. You'd normally want to put your bait in the deeper water behind the surf line, and that may well need a cast of biblical proportions.

The problem with casting a ledger rig is that the lead weight isn't fixed at the end of the rig. But in flight that's exactly the position it takes up, with the baited hooks flying around behind, doing their level best to twist around the main line and absorbing casting energy generally.

The simple but effective bait clip

Or rather, that's what would happen were it not for bait clips. These essential - and fortunately cheap - devices keep the baited hooks from flying around enabling longer, tangle free casts.

On hitting the surface, the hook (or hooks) falls clear and takes up its normal position downstream of the lead on the seabed.

Ledger weights for shore casting are of the aerodynamic pear or torpedo shaped variety - the circular gripper weight used for downtide ledgering from a boat would be totally unsuitable - and usually sport wire spikes, either fixed or of the 'breakaway' design.

In the right hands, a ledger rig can be cast a very long way using specialist surfcasting gear. And if surf-fishing is your thing, then you should take a look at these top surf-fishing tips.