Use a Homemade Downrigger
To Get Your Lure Down Deeper

Why bother with a homemade downrigger? Well if you can justify the expense of bought one, indeed why bother? But neither manual or electric downriggers come cheap. You're looking at from $100+ to over $1,000 for the very best.

OK, with a homemade downrigger we're not going to be able to get the same benefits and convenience as we would with an expensive electric one, but to create a means of getting our trolling lure down on its own separate line to a much greater depth than it would otherwise achieve is well within our capability.

The first version involves the butt end of a fishing rod and the second, just a rail-mounted reel.

An even simpler approach is to attach the planer line directly to a cleat at the stern of the boat.

The 'Rod Stub' Version of a Homemade Downrigger

A homemade downrigger is normally the result of an accident involving a rod, which leaves you with the butt end and maybe a couple a feet of the blank ahead of the reel fitting - Perfect!

You now need a reel that can handle wire line and operates below the rod, which rules out both conventional (multiplier) reels and spinning reels.

A drum reel is the answer - one like the Australian Alvey is ideal - and the larger its diameter, the better.

If the butt ring is left on the rod, don't be tempted to use it - the odds are it won't be up to the job. Cut it off and lash a pulley wheel in its place, and once you've wound on around 150ft (50m) of very strong line (ideally wire, but mono is easier to handle) and got yourself a downrigger weight or a planer you're ready to go.

Well almost - you will have to find a spare rodholder to put it in.

The 'Just a Reel' Version 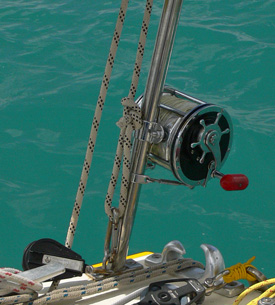 Our Penn Senator 12/0 trolling reel bolted to the sternrail.

But you don't have to wait until you've broken a rod before you can make a 'poor mans' downrigger.

I've got a Penn Senator 12/0 reel permanently fixed to the sternrail of my sailboat 'Alacazam' which is primarily there for the quick deployment of a trolling line when I haven't got the rods out.

But I sometimes use this as a 'homemade' downrigger. I've got braided dacron line of the reel, which isn't ideal for a downrigger line as it's large diameter and low density - mono would be much better and single strand wire line best of all - but it works.

With a planer, the line comes off the reel at about 45 degrees, which clears everything on the boat so the short extension that a rod butt-end would provide isn't needed at all.

Similarly you could use a reel specifically designed for the job, like the one shown here.

Even so, winding up a 12lb trolling weight from the depths would soon become a little tiresome.

Planers, like the Sea Striker Planer shown below, are much better suited for this type of homemade downrigger as they weigh just a few ounces and, once tripped, they're very easy to recover.

There are 4 planer sizes to choose from in increasing operating depths; 2oz, 5oz, 8oz and 10oz.

To trip them, just pull in 3ft (1m) or so of line and release it. You may have to do this a few times, as the planer needs to tumble to allow the attachment ring to move to the forward position. Conversely, it can be reset through the same procedure. 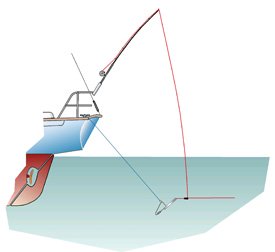 The Seastriker Planer Kit set-up on a sailboat

The 'Just a Planer Line' Version

This version of a homemade downrigger does without the reel too, by using a planer line of a fixed length which is secured directly to a stern mooring cleat!

Using this version on Alacazam it frees up the Penn Senator for trolling duties, enabling me to set two standard trolling lines plus one on the Sea Striker Planer Kit shown below.

Using this approach together with a deep-diving plug, I reckon I can get the lure down about 50ft (16m) with Alacazam bowling along at 6 to 7 knots.

Who needs an expensive downrigger!