As a lifelong freshwater angler, I can cheerfully spend hours float fishing in saltwater. In its lightest light-tackle form, say for harbour mullet, it's just like freshwater fishing.

First a quick word of explanation to our American friends - they're bobbers to you; we call them 'floats' here in the UK.

Either way, they're eminently collectable. I've got far more than I'm ever likely to use.

And I've got an even bigger problem with lures!

This is great fun, but mullet are cautious fish, so light lines, small hooks and floats will get the best results.

A medium-action spinning rod of around 10feet (3.5m) or so with a fixed spool reel loaded with 6lb line would be about right, together with a float taking 2 or 3 AAA split shot to cock it. A 'waggler' float like the one on the left is what I normally use, weighted so that only the top inch or so is showing above the surface.

A small piece of bread lightly squeezed onto the hook will normally get their attention, and chumming with soaked bread, squeezed into dense balls will help to get them feeding. Make sure the bread sinks, or you'll be mugged by hordes of gleeful seagulls. If fishing at anchor, delivering the bread by flushing it down the sea toilet is a neat answer to this problem.

Another way of outwitting the seagulls is, instead of bread, use a single grain of cooked sweetcorn on the hook and throw in a few grains every so often to keep them interested.

Whilst mullet can often be seen cruising around on the surface, they seem to take the bait more readily if it's fished about 6 feet (2m) down. In the UK, mullet will be of either the grey or thin-lipped variety, neither of which are highly regarded from a gastronomic point of view. Until fairly recently I was a subscriber to this opinion. Then I tried one that had been caught from a rocky shoreline rather than a muddy river estuary. It had been baked in the oven - and was absolutely delicious!

Prime spots for shoals of mullet are harbours, estuaries and tidal reaches of rivers - and rocky shorelines.

Saltwater Float Fishing for Bass, Mackerel and Other Species

Not quite as gentile as mullet fishing, but summer bass fishing from a rock mark is perhaps even more fun. You can expect not just bass and mackerel to put in an appearance, but also wrasse, garfish and pollack too.

The rod and reel described above will do fine, but the line, float and terminal tackle will need to be stepped up a little. Many fixed spool reels come with two spools. If yours does, you could load one with 6lb line for mullet, and the other with 8lb to 12lb line for mackerel, bass and their pals. 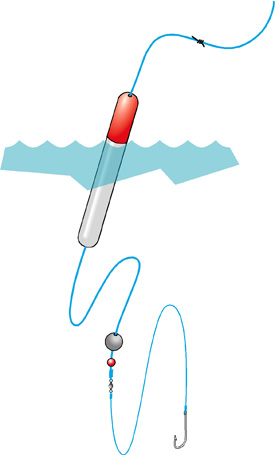 The float should be capable of supporting an ounce or so of lead, and be of the sliding type.

These have a central tube through which the line slides, as opposed to being fixed to the line like the mullet float.

Its task of course is to suspend the bait at the required depth and provide indication of a bite to the angler.

Use a stopper knot to stop the float at the desired depth, and set it up as shown on the left.

As for bait, a sliver of mackerel will be best for mackerel and garfish. A live ragworm - or if you can get it, a live sandeel - should prove irresistible to any pollack or bass, whilst wrasse are partial to shellfish.

Using live bait is seen by some people as being unnecessarily cruel, but there's no doubt that it's a very effective way of catching predatory fish. The debate continues, but the decision is yours to make.

But if you have no such reservations and catch a small joey mackerel, try it as a livebait for a bumper bass. Use a hook of suitable size, and hook the joey through the stronger part of the top lip. Cast it very gently - with luck it will swim out to meet up with the rest of the shoal. You'll probably find that you'll need a larger float to support it.